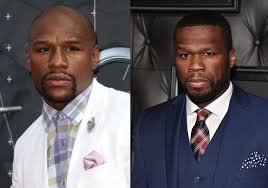 The beef between Floyd Mayweather and 50 cent is still going on very strong and the retired American boxer just dragged the heck out of 50cent with his latest Instagram post.

He shared the photo above with the caption, ‘You’re Not Supposed To Be Beefing With Me. You’re Supposed To Be Beefing With My WATCH. Me And You Are Not On The Same Level’.
Mayweather recently acquired the new wristwatch valued at $18m. And earlier this year, 50 Cent’s net worth was estimated to be $20 million, which is a huge drop from last year, when his net worth was declared at $150 million by Forbes.
READ:  "The Pregnant Mountain" Sculpture
Previous