You Need To Use Your Brain More – Scholes Tells Pogba 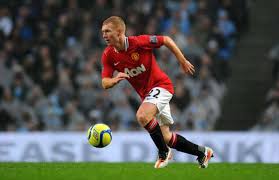 Manchester United legend Paul Scholes has adviced Paul Pogba to make use of his brain more.
Pogba, who may still be basking in the euphoria of just winning the 2018 FIFA World Cup in Russia for his country, France, must do more,  according to Scholes.
It’s no news that Pogba had it really tough last season, as he struggled for his club, ManU at the beginning but ended the season quite strong.
Although Pogba, turned out to be a great instrument for France winning the World Cup, Scholes still thinks he needs to become the player he was at Juve.
According to Scholes, the 25-year-old midfielder must bring his a game to Man. United next season.
Speaking with beIN SPORTS,  Scholes stressed that Pogba needs to find a consistency. He said:
“You look at his game, he can be brilliant one week and not so good the next week.
“He seems to be a player which you get a performance out of every three to four games. If you’re going to win leagues, that’s not enough, it’s just not enough.
“He needs to become that commanding player he was at Juventus – he was part of a set structure at Juventus, he knew every week which position he was going to play, who he was going to play with, and I don’t think that has helped him at United.
READ:  Disclosure Of Customer BVN Subject To Court Order- CBN Tell Banks
Previous