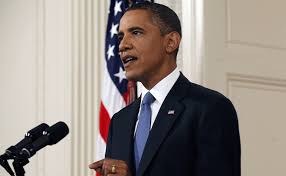 US President Barack Obama has branded the kidnapping of more than 250 schoolgirls in Nigeria by suspected Boko Haram Islamists as “heartbreaking” and “outrageous” thereby calling for international response.

The girls were taken three weeks ago, sparking global outrage, and the mass kidnapping may constitute a crime against humanity, according to the UN.
This week, Boko Haram chief Abubakar Shekau claimed responsibility, saying his extreme Islamist group was holding the schoolgirls as “slaves” and threatening to “sell them in the market”, in a video obtained by AFP.
“It’s a heartbreaking situation, outrageous situation,” Obama said in an interview with US broadcaster ABC on Tuesday.
But, he said, “this may be the event that helps to mobilize the entire international community to finally do something against this horrendous organization that’s perpetrated such a terrible crime.”
Obama confirmed that Nigeria had accepted a US offer to send a team of experts to help find the missing girls, saying “we’ve already sent in a team to Nigeria,” consisting of “military, law enforcement, and other agencies.”
This team will work to “identify where in fact these girls might be and provide them help,” the US president said, denouncing Boko Haram as “one of the worst regional or local terrorist organizations.”
Though initially slow to emerge, global outrage has flared over the mass abduction, when Boko Haram stormed a school and loaded the girls at gunpoint onto trucks.
Several managed to escape but over 220 girls are still being held, according to police.