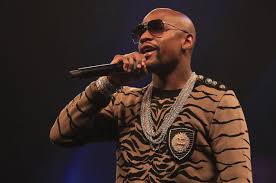 It’s the opposite of those online scams — a Nigerian company claims it was screwed out of a fortune by a wealthy American … and now he’s suing Floyd Mayweather to get his money back.
The company behind the lawsuit is Zinni Media — which claims it booked Floyd to make 5 appearances in Nigeria and Ghana in June 2017 … for the low, low sum of $375,000!!!!
The company says it got Floyd to make a video confirming the appearances — so, they thought they were good to go! They even wired him $210,000 in advance.
But, days before the first event, Floyd bailed — and the company was left holding the bag.
In the suit, Zinni claims Floyd’s reps offered to reschedule for Dec. 2017 — and added more appearances to the list — but, he also raised the price to $550,000. Zinni claims they were told they could use the $210k toward the new booking price.
Zinni says they ACCEPTED the new deal — but, when they asked Floyd to make a new video confirming the new dates, he bailed again … and never returned the original $210,000.
Now, Zinni is taking legal action in federal court in California — claiming Floyd damaged their reputation and defrauded them. Zinni wants at least $2 MILLION to make things right.
Should be couch-cushion money for Floyd … but, he does like a good fight.
READ:  Beauty Queen Sentenced To Death For Stabbing Boyfriend Who Infected Her With HIV
Previous