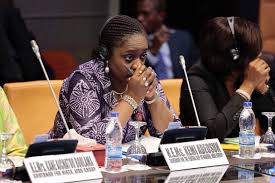 Premium Times also stated that Adeosun failed to participate in the mandatory NYSC scheme after completing her university education in London.
The minister earned a Bachelor of Science degree in Economics from the University of East London in 1989 after which she worked in various organisations abroad.
According to Premium Times, “When she eventually returned to Nigeria in 2002, Mrs Adeosun still did not deem it necessary to participate in the NYSC scheme. She simply accepted a job offer at a private firm, Chapel Hill Denham.
“However, ostensibly concerned that she might run into trouble for skipping the mandatory scheme, Mrs Adeosun, sometime in 2009, procured a fake exemption certificate.”
The report said that Adeosun’s certificate of exemption, dated September 9, 2009, was signed by Yusuf Bomoi,  a former Director-General of the corp, who had stepped down from the NYSC eight months earlier in January.

Formation of the NYSC

The National Youth Service Corps (NYSC) was set up by the Yakubu Gowon administration on May 22, 1973 as a tool for re-building the nation and reconciliation after the civil war by decree No. 24.
The aim of Gowon’s government was to promote promotion of national unity and build strong bonds among youths of Nigeria.

There have also been calls recently, for the scrapping of the scheme based on issues of security in some parts of the country, but proponents of the scheme have argued that it has helped graduates from universities and polytechnics appreciate the values and culture of other ethnic groups, and  that it has achieved some of the objectives set by its founding fathers.
A quick look at the NYSC Act that deals with the issue of forgery and refusal to participate in the scheme, reveals several jail terms and fines for offenders.

According to Law Nigeria, section 13 of the NYSC Act states as follows:

‘Did Zahra And Yusuf Buhari Do Their NYSC?’ Reno Omokri Defend Finance Minister