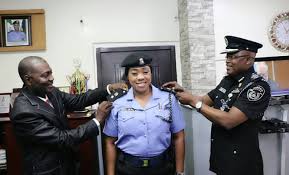 Dolapo Badmos, Lagos State Police spokesperson, in a post recently on her Instagram page urged young women to stay away from Internet fraudsters aka Yahoo boys.  Badmos, said this on Wednesday, while reacting to the death of Adenike Oluboyo, daughter of former Oyo State deputy governor.
Adenike, was allegedly killed by her boyfriend, Adeyemi Alao for ritual purposes and was subsequently arrested after his younger brother reportedly saw the decomposing body of Adenike and reported the incident to the police.
“To you young ladies out there especially the younger ones, kindly be informed that associating and dating these so called Yahoo Boys is the fastest way to lose your lives. You have all heard about several incidents involving young girls being killed for ritual purposes just for these boys to keep enriching themselves.
“Please note that the phone he bought for you, the clothes or car, he spends that much to gift you or any other thing he gifts you that might have your life used as exchange. Yahoo boys from all indications now use blood to sustain or enrich their ill-gotten wealth.
“My sincere advice to you all is to pitch your tent with that hardworking young man that won’t amass wealth through illegal means, together you can build an enviable future. Remember, your lives are precious, don’t lay it down on a platter of peanut. It is harrowing investigating waste of lives by these so called G guys!
READ:  Kim Kardashian Flaunts Boobs In Latest Shoot
Previous