37 Reps Dump APC For PDP In A Rowdy Session 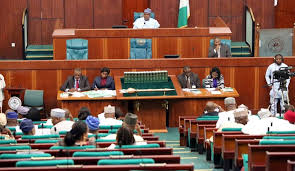 The House of Representatives has been thrown into a rowdy session following the defection of 37 lawmakers from the ruling All Progressives Congress (APC).
33 lawmakers defected to the opposition, Peoples Democratic Party (PDP) while four joined the African Democratic Congress (ADC).
The Speaker of the House of Representatives, Yakubu Dogara, announced the defections during plenary on Tuesday.
This comes after Senator Dino Melaye, former Governor of Kano, Rabiu Kwankwaso and 13 other Senators defected to the PDP.
The defecting Reps are Danburam Nuhu, Mark Gbilah, Razak Atunwa, Ahmed Garba Bichi, Abdulsamad Dasuk and Zakari Mohammed, Sani Rano, Barry Mpigi, Ali madaki, Dickson Tackighir, Hassan Saleh.
Also, the Chairman of Rules and Business at the House of Representatives, Orker Jev has resigned from the APC but is yet to disclose which party he would be joining.
Meanwhile, the APC lawmakers want the party to challenge the legality of the defection, they are asking for the seats of the defectors to be declared vacant.
READ:  IBB's 75th Birthday: Pictures From The Prayer/Get Together
Previous